Foreign visitors have warmly welcomed Vietnam’s continued visa exemptions for guests from the UK, France, Germany, Spain, and Italy, saying the policy is good for the country to spur tourism. 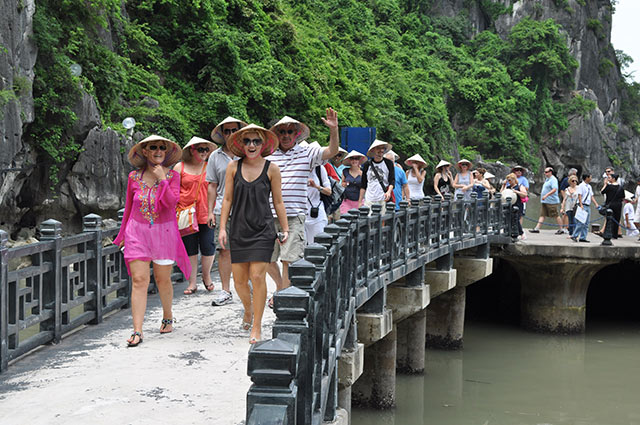 From the beginning of July, citizens from the UK, France, Germany, Spain, and Italy will enjoy visa exemptions for the next three years, until June 30, 2021, as approved by the Prime Minister.

“Visa exemption is good for the country to open to tourism,” said Anthony Dme, a visitor from France.

Vietnam first offered visa waivers for citizens from the five European countries in July, 2015. The policy has been updated annually and would have expired at the end of June.

French guest Anastasia Belkacemi said the policy made people want to go because they did not have to pay.

“We feel like part of Asia that we can come in easily like Indonesia, no need visa,” Matteo Lelli, an Italian, said.

Vietnam is among countries with the strictest visa policy in Asia. The country currently offers visa waivers to visitors from 24 countries and territories, including the ASEAN member countries.

The country has tried to improve the situation with an e-visa policy which is now available to people from 46 countries.

Minister, Chairman of the Government Office Mai Tien Dung has said the government would consider proposals from the Vietnam Tourism Association on the extension of the period of stay from 15 to 30 days and expansion of visa exemptions for more countries.

Some visitors felt pleased with the valid time of visa exemption while others wished they could have a longer stay.

“When you want to go to a country you want to stay long and see everything. So the visa exemption is longer, it’s better,” Anastasia Belkacemi from France said.

Anthony Dme, a French tourist, said “I would say of course free visa for every time and everywhere is good, but we’re still glad for 15 days.”

Michelle Armstrong from the US said it took her three days to get e-visa to Vietnam and it was very easy.

In the first five months of this year, foreign arrivals to Vietnam surpassed 6.7 million, up 27.6 percent annually, according to the General Statistics Office.

According to the Travel and Tourism Competitiveness Report 2017 compiled by the World Economic Forum, Vietnam rose eight places in just one year to rank 67th in the world.

“The main drivers of the country’s T&T competitiveness are its natural resources (34th), cultural resources (30th) and price competitiveness (35th). Vietnam has made significant progress on its human resources and labour market pillar (37th, up 18 places) scores, thanks to a better-qualified labour force (53rd) and partially simplified regulations on hiring foreign labour (75th)”, the report says.

Easier visa application procedures for foreign tourists, as well as visa exemptions for visitors from the UK, France, Germany, Italy and Spain have helped attract more tourists from these markets, experts said.